Contact us and we will reply within an hour. 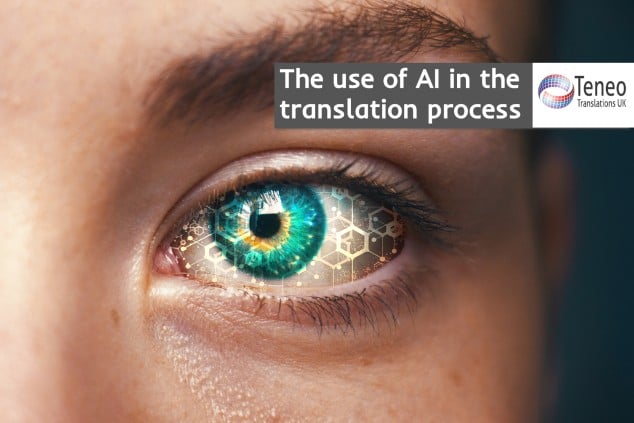 In common with most industries, the translation sector is being disrupted by the use of AI. Whether this is a good thing or a bad thing depends very much on your own individual outlook; some people cite the Terminator scenario and are petrified of the consequences of ever-more technology being used to replace perfectly viable jobs and put people out of work. Others look upon the (supposed) impending take over by machines as something to be embraced as it will lead to a utopia where everyone can search for their life’s meaning without having to worry about getting up for work at stupid-o’clock and expending their energy on mundane tasks.

Personally, my view is somewhere in between; I have some concerns but don’t believe that we need to panic about Arnie lookalikes kicking our front doors in; fingers crossed.

The reason for this article is not so much to explore wider, future questions about society but to describe the changes that AI has made within the translation sector and highlight that, in common with the above description, there are positive and negative effects.

In terms of the positives, the first that leaps to mind is the fact that the ability to translate something is now readily available for everyone and, whilst there are still some significant problems with the quality (you wouldn’t want a medical procedure, legal contract or safety instructions to be translated by a robot – at least, I wouldn’t); things are improving within the most widely used Western languages. The Asian and certain Slavic languages, with their character differences, still prove a tad problematic for most algorithms.

Nevertheless, I view this greater accessibility of local languages as benefitting the translation sector in that people now expect to have their content delivered in their own language. The fact that, in  a survey, over 50% of consumers say that the ability to obtain information in their own language is more important than price is a strong indicator that people’s expectations have grown with the greater availability of localised content. So whilst the world has shrunk incredibly in the past 50 years and we are now more of a global village, peoples’ expectation is that they can and will be spoken to in their own language.

At the same time that machine translation (MT) has become more widespread, so too has the use of computer aided translation (CAT) tools. These are software programmes that don’t replace human translators but enhance their work by ensuring that terminology and tone of voice can be harmonised across projects. This has enabled large projects to be completed more quickly than previously would have been possible, without any variances in terminology.

So there are huge benefits in using MT and CAT. However, as always, there needs to be a note of caution.

Yes, machine translation is, mostly, free to use and almost instantaneous; however, I believe there is still a need for human translators and hope this continues for many years to come. As well as a broader societal issue that I personally believe pertains in employing people to do a job they love (mostly); using MT has a few negatives to counter-balance the speed/cost issue.

The first and most obvious, is quality. Unfortunately, or fortunately, whichever way you look at it, the quality produced by the algorithms is fine for everyday use where there are no nuances, or the end result does not matter. However, there are many examples where a translation absolutely must be exact and precise. Within the legal sector for example, a word can have different connotations, depending on how and when it is used. Similarly, the medical sector demands that meaning must be clear and accurate.

MT also fails where marketing localisation is needed and a concept in one language just does not resonate in another. There is simply no point in spending vast amounts of money on marketing if you are going to lose all the impact in translation.

This lowering of the perceived quality of translations has been exacerbated by a worrying trend which has emerged in the past few years. This is the emergence of scammers within the translation industry. These are individuals who steal the identities of genuine translators and then send their CVs into translation companies. These individuals are not the skilful, experienced and well-educated people they appear but are, in fact petty criminals.

If a translation agency doesn’t have a robust vetting system for their linguists (and some don’t), then they run the risk of giving work to these scammers who will then deliver a poor quality piece of work which may or may not (again depending on the robustness of the translation agencies internal quality processes) be delivered to the end client.

Of course, this client will then be left wondering why they are paying a premium for a human translation, when the quality is just the same as a machine translation. Unfortunately, I receive hundreds of emails a week from would-be scammers but have made sure that they all go to my junk folders where they belong. There may be some agencies out there who do not filter out the dross. There is an organisation which has produced a website where you can find the names of those scammers who have been discovered it is https://translator-scammers.com

Unfortunately, given the tens of thousands of translation agencies in the world, these scammers will find a target eventually.

This site uses functional cookies and external scripts to improve your experience.

NOTE: These settings will only apply to the browser and device you are currently using.